On my way to the office this morning, I noticed many holiday decorations in red and green. They always bring me joy and I stopped to take the picture at the top of this post.

Unfortunately, in the financial markets, red and green evoke other feelings such as the ones illustrated in the charts below. 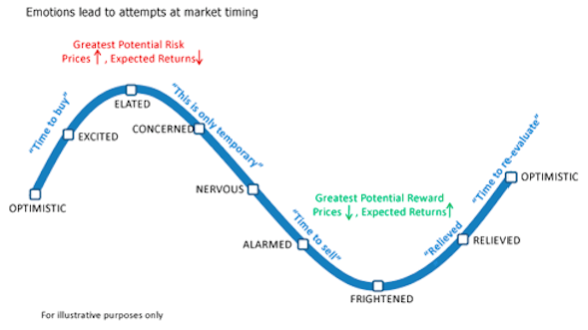 Lately, we’ve all been experiencing these emotions and the red versus green.

This is totally understandable, and investment professionals and financial commentators are not immune.

If they were, we wouldn’t see so many sensational headlines, which tend to create short-term trades that are generally detrimental to long-term success.

Related to this, the following was one of the most prominent headlines promoted this morning:

“The Worst is Yet to Come: Experts Say”

Headlines like this get a lot of clicks and sell a lot of banner ads, but they consistently remind me of a phrase that I’ve written about many times before.

“Never in doubt but often wrong.”

I know I’m fighting a constant battle against the financial public relations machine, though, so below are a few quotes that I’m posting again, along with a new Red and Green chart.

This is a quote from Salil Mehta, who has been collecting data on the accuracy of Wall Street forecasts for over 20 years.

In one of his most detailed pieces, Desolated Admirers of Investment Strategists, he highlights compelling long-term data. It includes information that he’s sure Wall Street “emperors hope you forget.”

As the industry knows well, he discusses how most people don’t tend to care as much when upside predictions are proven to be less accurate than a coin toss. If the market is up over 20%, as it was in 2017, people will tend to forgive conservative predictions that were commonly predicting single digit returns.

People focus more on pain avoidance, meaning that what investors really care about is downside protection – advice about when to sell before a bear market.

What does Mehta’s research show about how many times Wall Street has accurately predicted a market drop?

Unfortunately, this has been well known but generally ignored for quite some time.

As an example, CXO Advisory collected data from over 6,500 predictions made by 68 investment gurus.

What did they find?

The accuracy of well-known investment strategy professionals, including industry luminaries such as Jeremy Grantham and Abby Joseph Cohen, was only 47 (see the following for the complete study – Guru Grades).

The evidence consistently suggests that market forecasts aren’t worth much, but this doesn’t mean you shouldn’t look at data. Data can absolutely help you develop a long-term plan you feel comfortable enough to stick with and not change based on short-term predictions.

Like the enduring design approach of Steve Jobs, the best financial strategies evaluate all kinds of data then strip away everything that isn’t in simple service of the underlying goal.

It might sound overly simplistic or passive, but as I detailed last year in a piece for Trust & Estates magazine, How to Perform Better, keeping it simple has consistently outperformed even top university endowments.

The next time you hear an emotional investment prognostication, stay anchored on what Janet Yellen once privately cautioned me with a smile, after she shared her market view.

To hopefully help, below I’ve illustrated red and green numbers that I wish were reported more often. This is how long-term investors have been rewarded if they Keep a Steady Hand on the Tiller (click this title to read sound advice from my now 13-year-old son).

As I wrote a while ago in another piece titled Your Brain on the Market, I know this is not easy.

We’ve been here many times before, however, and have successfully helped investors navigate troubled markets in 1990s, the dot-com bubble of the early 2000s and the financial crisis of 2008-2009.

Along the lines of the Cycle of Market Emotions chart at the beginning of this post, the next few weeks or months could create more “alarmed” and “frightened” headlines.

If this comes to pass it will feel uncomfortable, but based on our experience, this is consistently the time to avoid the day to day red and green of the market and stay focused on your long-term plans, not the models or prognostications of others.

History continues to show, however, that true long-term investors are consistently rewarded with returns that allow them to meet their goals and objectives.

Special thanks to Corey Hoffstein for being a sounding board on this and for helping me pull together return charts quickly.

Don’t Be A Sheep

Don’t Let Your Portfolio Get Sacked

+ posts
SHARE
Tags:
Cycle of Market Emotions, Forecasting, Investing
RELATED ARTICLES
Staying Disciplined and Avoiding Unforced Errors
The track records of many successful professionals can be attributed to keeping it simple and avoiding unforced errors
Still Keeping A Steady Hand
Every year over the past 10 years we have written a similar letter.
Recessions – What Should Investors Do?
The evidence may surprise you.
All articles